A recipe for the autumn.
Mangia bene!

Boil water
Heat olive oil.
Sautée carrots and onions until onions are transparent.
Add garlic, oregano and parsley, then tomatoes and a cup of water.
Add salt and pepper to taste
Boil then add beans and cook on medium for 40 minutes

Bring to rolling boil. Cook pasta until it's al dente and drain.
Add the pasta and the cannelini beans to tomatoes already cooking and simmer for about 7 minutes.
Posted by Sigi Me at 10:11 PM 1 comment:

Who's in YOUR freezer?

I've blogged already about the Sicilian curse/supestition/hex whatever it's called, of "freezing" someone bringing negativity into your life and how, in spite of my Catholic upbringing and 12 years of parochial schooling, I believe in it. And although I am only 1/4 Sicilian, it still allows me to carry out this little ritual to keep your life free of energy vampires.

A recap. If someone in your life is causing you grief or anguish, or is so jealous of you that he or she has gone to lengths to turn others against you, or antagonizes you, vilifies you or picks fights with you and you are certain that you want nothing to do with him or her ever again, you do the following:

The belief is that you will freeze the person out of your life. My belief is that the people's love lives will be cold and unfulfilling, or they will feel a chilly breeze all the time, or their skin gets really dry. But that's just my wishful thinking. :-)

I have a few people in my freezer who have caused me great anguish; I don't just stick people in there willy nilly. And while most of them are still peripherally in my life out of necessity, we no longer butt heads. The others have delighted me by disappearing from my life all together. They're probably too busy shivering to bother me.

I've also heard that only a person of Sicilian heritage can perform this "curse," if you will.

So, if you've crossed a Sigi lately and you're sitting at home on a Saturday night in your pj's because your dating pipe line has frozen up, or you find your teeth chattering for no reason, or you find yourself craving warm, oven-made foods to make you feel good...maybe you're under a pork loin in someone's freezer.

A Tasty Birthday for Dad

This weekend my family and I celebrated my awesome dad's 77th birthday. (Due to technical issues I did not post on his actual birthday this year.) I am so grateful to have him for another birthday. He's been dodging bullets for the past several years (as has been my mom).

Yesterday everyone came to my house for the party. My sister made a special point of bringing his very favorite cake- Italian cream. Actually, this cake is the only cake we ever had for birthdays growing up. A close friend of the family was a baker and every year my dad brought home an Italian cream cake- rum flavored and covered in tiny peanut bits.

I never cared for it all that much.

But don't get me wrong. I ate it. Duh! It was CAKE, after all. My favorite memory was the year my dad had "Uncle Joe" put Beatles figurines on the top for me. I wish I had saved them. But to tell you the truth, as an adult I'm not much of a cake person. I like carrot cake and ice cream cake a lot but that's the only kind I really go crazy over. I don't care much for cupcakes either. I just don't feel like wasting the calories on something I don't really like. It's too hard to work it off.
Anyway, so yesterday my sister brought this beautiful cake from an Italian bakery outside of Philly called Testa's: 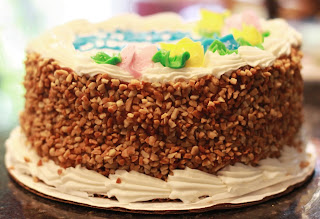 It was a work of art.


Needless to say, my dad was pleased as punch.

Growing up in suburban Philadelphia, I spent a lot of tine at my grandfather's house. We moved from Philly to a house two doors down from his and that's where the family parties always were held. As one of 12 kids, he always invited all his siblings for a yearly barbecue.

At those barbecues there were three givens. Only grilled food would be edible, as his second wife could not cook (nor was she Italian but the two are not mutually exclusive), his lawn would be meticulously manicured, that thick type of grass you could step on and lose your foot in, and there were games. Notably, horseshoes and bocce. No Italian-American outdoor gathering would be complete without a game of bocce. Just ask my dad, who broke his foot when a bocce ball fell on it! Those things are heavy!

When I got my own house with a lawn, I bought a bocce set. Last night in the 80 degree weather my set made it's 2010 debut. My daughters love it and are very competitive. It's a lot of fun and I'm happy they are taking part in the tradition. As long as they don't drop it on my foot!

Word of the Day- SCOOCH!

Growing up, if there was one word in Italian (or butchered Italian) that I heard over and over, it was the word "scooch." It means "pest," or "pain in the neck" and I believe it comes from the Italian verb "scocciatore," which means to bother.

As you can see, the poor word has been bastardized like so many other Italian words, by Italian-Americans. But when you're not a first or even second generation Italian, and you pick up words from your grandparents or even their parents, it's kind of like whisper down the lane. You know how what the original version gets all twisted up by the time it reaches the last person? It's kind of like that.

It can be used in verb or noun form.

"Claudia, don't scooch me while I'm cooking!"
"Hey, don't be a scooch- I'm trying to concentrate and you keep talking."

Enjoy your butchered word of the day.
Posted by Sigi Me at 10:25 PM 4 comments:

My little Sicilian grandmother died in 1998 at the age of 95, devastating our family. Though she was tiny, she was mighty, and left me with many great memories.
Last week I was sick with one of the worst colds I've ever had. I missed 3 days of work and could barely get out of bed on Wednesday. Nighttime was especially bad, trying to use any comfort measure I could to keep my symptoms at bay. A vapor bath, hot tea, Zicam, Dayquil, Nyquil, breathing strips, and of course, Vicks Vapor Rub.
When I was a kid and I was sick, my grandmother would always rub Vicks on my chest then pin a piece of flannel to my pajamas so the Vicks wouldn't absorb or smear. I forever associate Vicks not just with mentholating action and relief, but with being cared for and loved.
Every time I use Vicks or even smell it, I think of my little Nonna, Santa, (her name just happens to mean "saint" in Italian) and I smile. It took a long time for me to smile and not get choked up when I think of her but it's true, time heals all wounds.

My favorite site in Philly

This is Boathouse Row in Fairmount Park, on the Schuykill River next to the Philadelphia Museum of Art. These are not residences, they house shells for crew for the Schuykill Navy. At night they turn on the Christmas lights and they look like gingerbread houses. Ever since I was a little kid I loved driving past this place, which is a national historical landmark. I finally got around to taking pictures of it this summer and again last weekend. Next I want to see a regatta there and take photos of that.

Historical tidbit- this part of the area is called Kelly Drive, named after the brother of Philly's own Princess Grace of Monaco. John Kelly, former Philly councilman, was an oarsman and an Olympian.

I Was a Fraudulent Philadelphian

When people think of Philly they think of the birthplace of Independence, the historical buildings,

the World Champion Phillies (1980, 2008), ill-tempered sports fans (guilty, but we just want ONE Superbowl ring!), soft pretzels, Will Smith, and of course, the movie Rocky. If there were any doubt about the latter, a stop at the Philadelphia Museum of Art will prove it. There, according to one of the events coordinators, tour buses pull up to the curb, dozens of people get out, run up the steps toward the museum, jump up and down in victory as Sylvester Stallone did in the movie Rocky, and run back to the waiting bus, and leave. On my visit this weekend I saw this with my own eyes. I counted eight people within a few minutes, rushing up the steps to reenact this iconic scene. One of those not entirely sane or physically fit people was me.

Understand that the Rocky series (Rocky 3 at the top of the list) are among my favorite movies of all time, from when I was a kid. And since then I have always wanted to run those steps. Not only did I never run up them, I never even walked them. For some inexplicable reason, yours truly, a former art student, never stepped foot inside the museum. I've been in others around the world and the USA but not the one in my own hometown. Not the one made famous in my favorite movies, by one of my favorite actors. I had never seen the iconic Rocky statue from Rocky 3 that Stallone had donated to the city. I was a fraudulent Philadelphian.

Finally this summer, I visited the museum. It was 90 degrees and while I stared at the steps, envisioning rushing up them, I also envisioned passing out from heat stroke at the top and being carted off to the ER. As I was with an out of town friend that day, I didn't think a trip to the hospital would be a good addition to the itinerary. So I took photos of the statue and the Greek-styled museum
and skipped the steps.

But this past Saturday, camera gear in hand and children in tow, over thirty years from Stallone's run, I did it. At age 41. And while I work out 5 times a week, I didn't expect to make it up the steps with my busted knees intact. While my daughter filmed and added commentary, I braved the winter chill and ran those damn steps. Man, there were so many! I took the second half two at a time to finish quicker, though not quite as earnestly as Rocky had. I got to the top what seemed like 4 hours later and looked down at my kids jumping up and down, happy that I had done something that I had talked about doing since I was 10 years old. Then I tasted the lactic acid build up in my mouth and felt my heart pounding in my throat. Wow, I'm going to have a heart attack because I waited until I was middle-aged to do this, I thought. I slumped against the wall and waited until my heart made its way back to its proper location. Ten minutes later I walked back down then up again after filming my daughter do the run, but with ease. Teenagers!

So now I can say that I've been to the museum, run up the steps and seen the statue. I don't know how much of a real Philadelphian that makes me, especially when the guy at the bottom of the steps was selling fake Philly soft pretzels along with Rocky t-shirts, but it made me a real Rocky fan and I got to cross off an item on my bucket list.


- Posted using BlogPress from my iPhone